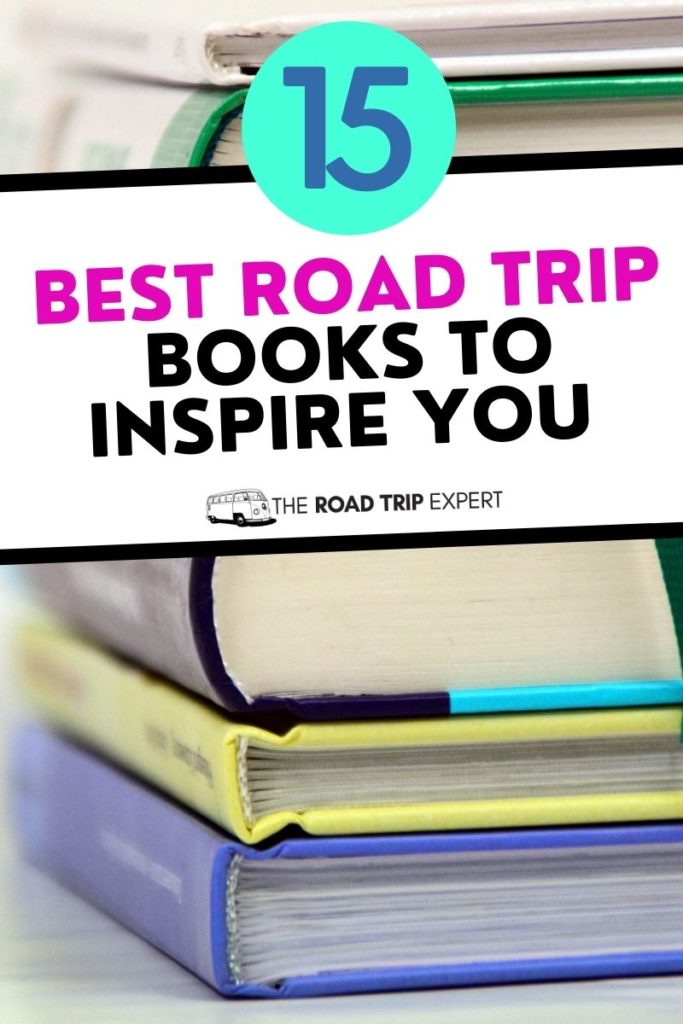 Here are our recommendations on the best road trip books to inspire you to head out on your own adventure. These awesome books about road trips will keep you entertained from start to finish. There are some absolute classics about solo adventurers hitting the road.

Let us know which of these road trip novels are your favorite, and if there are any you think need to be added to the list! Read on for the definitive guide!

1. On the Road by Jack Kerouac

No best road trip book list would be complete without On the Road. A defining counterculture novel written in the 1950s, Kerouac base’s his story on the adventures he had while traveling across the USA.

With plenty of jazz, drugs, and personal revolution it’s a must-read.

From 1973 to 1977, Simon traveled across 54 different countries on the back of a Triumph Tiger 100 500 CC motorcycle. In Jupiter’s Travels, he chronicles his journey through countries in revolution, at war, and in disaster. He meets people from all walks of life and through the connections he makes, he discovers who he really is. This is such a good road trip book, an absolute must-read!

3. We All Loved Cowboys by Carol Bensimon

Short and sweet, We All Loved Cowboys tells the story of strained friends Cora and Julia. Despite having had a recent falling out, the two decide to follow through on a long-planned road trip through Brazil. As they drive from town to town, old tensions resurface and the girls begin to suspect that they may want to be more than just friends.

A story of queer love, coming of age, and adventure.

4. Fear and Loathing in Las Vegas by Hunter S. Thompson

An American classic, and possibly the most notorious road trip story, the list wouldn’t be complete without Fear and Loathing in Las Vegas. Raul Duke and his attorney Dr. Gonzo travel to Las Vegas to cover the mint 400 motorcycle race but find themselves quickly sidetracked by life’s taboo pleasures. Thompson seamlessly connects the drug-induced experiences of his characters with real-life experiences and 1960s current events.

Full of satire, criticism, and illegal activity, it is the reason what happens in Vegas, stays in Vegas.

While not strictly a road trip adventure, American Gods will scratch that traveling epic itch with a little sci-fi thrown in. The day Shadow is released from prison, he learns of the death of his wife and best friend. Lost and mourning, he finds himself in the employ of one mysterious Wednesday. He finds himself traveling the country, caught in a war between the Gods of Old and the current God of Technology- Technical Boy.

Hilarious, dark, and moving it is an inspiring tale of adventure. It’s one of the best road trip books around.

A beautifully illustrated work of fiction, Flaming Iguanas storms in to take the spotlight from the male-dominated motorcycle road trip genre. Tomato Rodriguez sets out from New Jersey to California with her friends to see her father. As Tomato weaves her way through the USA, she begins to untangle the barriers she’s put up around her sexuality and ethnic identity.

Hilarious, beautiful, heart-warming, and a motorcycle adventure that would make anyone trade in the old 4 wheeler for 2.

7. Into the Wild by Jon Krakauer

Into the Wild is the incredible true story of Chris McCandless; a young man who hitchhikes deep into the Alaskan wilderness where he ultimately finds his death. His story is full of inspiration, adventure, and caution. Krakauer examines the wildness in our hearts and the lure of freedom and open wilderness that called Chris on his greatest, and final, adventure.

8. Catfish and Mandela by Andrew Pham

Pham is a Vietnamese American whose family fled the conflict in Vietnam for a new life in the USA after his father’s time as a POW. After his sister’s suicide, he sells all of his possessions and sets off on a year-long bicycle journey. In Catfish and Mandela, he shares the experiences he had in the deserts of Mexico, a 1,000-mile loop in Japan, and ultimately a 2,357-mile ride to Saigon.

Pham goes on an incredible journey to find his cultural identity and inner strength that will leave you awed and inspired.

Grant was fascinated by the nomadic lifestyle and spent 15 years wandering the USA, never spending more than 3 weeks in any one place. American Nomads is the story of his travels and the real-life nomads he got to meet on his journey. He spent time with truckers, rodeo cowboys, RV dwellers, flea market traders, anyone and everyone who lived a life of constant movement to learn what it is about that wandering lifestyle that so appealed to them.

His experiences, mixed in with a little history of the American Nomad, contrast starkly with the typical American Dream. He will have you wondering if you still want the house with the little white picket fence or an airstream.

Jules Verne wrote the fictional Around the World in 80 Days in 1872 and inspired a generation to wonder, could they travel the world faster? Journalist Elizabeth Jane Cochrane convinced her editors at the World that she could and that they’d make a killing sponsoring it. She traveled with one small bag that measured just 7 inches tall and 16 inches wide. At a time when women were rarely working, let alone traveling the world unaccompanied with nothing but a handbag for luggage, she showed that the spirit of adventure knows no gender.

In 1890 she published Around the World in 72 Days was published under her pseudonym detailing her journey through England, France, Brindisi, the Suez Canal, Colombo (Ceylon), the Straits Settlements of Penang and Singapore, Hong Kong, and Japan.

11. The Death of the Grass by John Christopher

An eerie read in light of recent world events, The Death of the Grass tells the fictional story of what happens when a new virus threatens to wipe out all wheat and rice crops. As famine approaches and the world begins to unravel, John Custance decides to take his family and flee to his brother’s protected potato farm in northwest England.

A road trip fraught with danger, tough decisions, and suspicious allies this one will definitely get the old heart beating.

12. Travels with Charley in Search of America by John Steinbeck

With his 60’s getting underway, Steinbeck did what we all do: set out for a cross-country road trip with his standard poodle, Charley. In Travels with Charley, he records the places he passes through and the company he meets (including a bear in Yellowstone National Park) as well as reflects on the culture of America as he passes it by on the road. Never one to shy away from the tough topics, Steinbeck talks about racial hostilities, the unique form of American loneliness, and the hidden kindness in the world.

Steinbeck died just 6 years after the publication of this work and it’s believed it was an intentional journey to see and reflect on the country before he passed.

A dark fantasy horror set in the Jim Crow era of the USA, Lovecraft Country is a wild ride from start to finish. Atticus Turner sets off on a road trip to New England to find his missing father with the help of his Uncle George and childhood friend Letitia. As they journey, they face both real demons and evil of racist America, but nothing compares to the horrors they discover at the manor where his father is being held prisoner.

A story as full of hope and freedom as it is darkness and fantasy, it’s a wild adventure full of sobering truths for all. It’s one of those books about road trips that you don’t want to miss out on.

14. Where the Crawdads Sing by Delia Owens

Another one that isn’t quite based on an actual road trip but that we felt more than deserves to be on the list. Kya Clark, also known as Marsh Girl, has spent her entire life in a tin shack in the marshes of a small southern town. Intelligent, insightful, and mysterious, the townspeople fear her and when a body turns up in the marsh, she’s the first suspect. This story of courage, transformation, and freedom with its vivid wildlife descriptions will have you packing up the car and heading out to Where the Crawdads Sing.

15. The Wild Places by Robert Macfarlane

In a world predominately run by technology and consumerism, it’s easy to feel disconnected from nature. Macfarlane decides to set out in search of all The Wild Places he can find in Britain and Ireland. As he reconnects with nature, he finds himself becoming more connected to himself and the history of the earth itself.