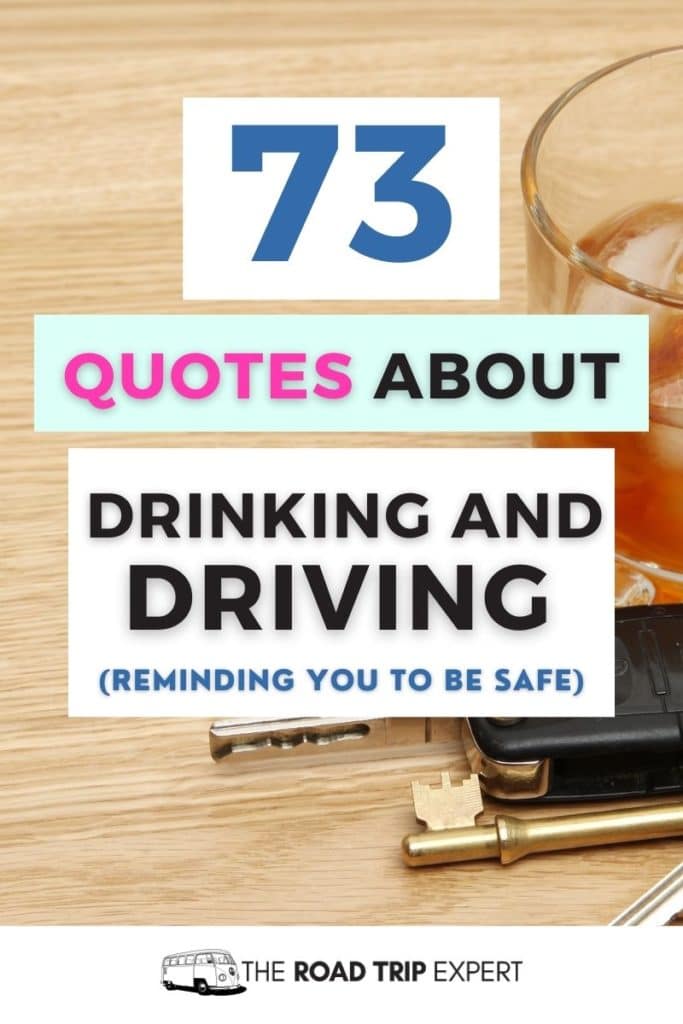 This article will bring you some of the best-known quotes about drunk driving. Some from famous faces, some serious and informative, and some putting a light spin on the controversial! If you’re enjoying this article whilst intoxicated, make sure you’re not behind a wheel and on the road.

Some of the best moments are made whilst tipsy, and we’re all about having a good time. However, remember, use these don’t drink and drive quotes to remind you not to get behind the wheel!

“A drunk driver is very dangerous. So is a drunk backseat driver if he’s persuasive.” – Demetri Martin

“Nowhere in this country should we have laws that permit drinking and driving or drinking in vehicles that are on American highways. This is not rocket science. We know how to prevent this, and 36 states do.” – Byron Dorgan

“Each drink you have before driving impairs your judgment, don’t drink and drive.” – Unknown

“If you drink don’t drive. Don’t even putt.” – Dean Martin

“An intoxicated person might become angry if others suggest that he or she should not drive.” – Valerie Mendrala

“Millions of deaths would not have happened if it weren’t for the consumption of alcohol. The same can be said about millions of births.” – Mokokoma Mokhonoana

“Drinking and driving: there are stupider things, but it’s a very short list.” – Unknown

“It takes only one drink to get me drunk. The trouble is, I can’t remember if it’s the thirteenth or the fourteenth.” – George Burns

“There’s only one thing worse than being driven to drink, and that’s driving yourself home from it.” – Evan Esar

“Alcohol is a make-you-stupid drug.” – Beverly A. Potter

“There’s no question that we need tougher drunk-driving laws for repeat offenders. We need to take a lesson from European countries where driving isn’t a right but a privilege.” – Jesse Ventura

“Drinking and driving can destroy lives and families.” – Valerie Mendrall

“Drinking and driving is safer than either drinking or driving – and no one has ever died drinking, driving and juggling.” – Lee Mack

“I know some people are against drunk driving, but you know, sometimes you’ve got no choice. Those kids got to get to school.” – Dave Attell

“A woman drove me to drink. I don’t drink and drive.” – Brian Spellman

“Driving under the influence is a highway to detention, or ends in a death zone.” – Martin Uzochukwu Ugwu

“Teens who get behind the wheel after drinking may also hurt innocent bystanders or other drivers.” – Valerie Mendralla

“It’s as if people used the invention of seat belts as an opportunity to take up drunk driving.” –  John Lanchester

“I want to thank everyone out there who has chosen not to drive after they have had something to drink.” – Audrey Conn

What do you think about this drinking and driving quote?

“I’ve got two little girls, I’m not scared about sex. I’ll teach them, it’s not going to kill them. But what could kill them is violence. Guns, drinking and driving, these are the real dangers in our society.” – William H. Macy

“More people die on a per-mile basis from drunk walking than from drunk driving.” – A. J. Jacobs

“Drinking and driving has devastating effects on the entire nation. At the very least, people who drink and drive can lose their privileges to drive. At worst, they can lose their loved ones or even their lives.” – Valerie Mendralla

“The one for the road may be two for the cemetery.” – Evan Esar

“I drive better when I am drunk because I do back seat driving.” – Amit Abraham

“Baseball is like driving, it’s the one who gets home safely that count” – Tommy Lasorda

“This is interesting. Researchers have found that people who drive drunk are more dangerous on the road than drivers who are high on marijuana. Don’t get too excited. It’s mostly because the drivers using marijuana are just sitting in the Taco Bell drive-through.” – Jimmy Fallon

“Drinking and driving is a gamble that you just can’t win.” – Unknown

“Drinking and driving threatens the lives of all Americans. Whether we are drivers, passengers, or pedestrians, whether or not we drink alcohol, each of us is at risk of being involved in an alcohol-related crash at some time during our lives.” – Ross J Homel

“The best car safety device is a rear-view mirror with a cop in it.” – Dudley Moore

“If you’re going to drive a Hummer and buy carbon offsets, that’s like getting drunk every night and getting into an AA meeting, throwing money in the basket, and leaving.” – Ed Begley, Jr.

“As an alcoholic, you will violate your standards quicker than you can lower them.” – Robin Williams

“Drunk driving contains a far greater risk of violent death than the use or sale of illegal drugs, the societal response to drunk drivers has generally emphasized keeping the person functional and in society, while attempting to respond to the dangerous behavior through treatment and counseling.” – Michelle Alexander

“Drinking and driving kills someone every 48 minutes, don’t be a murderer.” – Unknown

“Their alcohol consumption levels haven’t dropped much, but their drunk driving has.” – James Lange

“I got involved in improv comedy. It settled me down when I was getting wild. I was sort of an evil teenager smashing up my cars and drinking and driving, let’s just say, a lot.” – Bruce McCulloch

“A woman drove me to drink and I didn’t even have the decency to thank her.” – W. C. Fields

“I have a responsibility, and it’s something that I did wrong, and if I could personally apologize to every single person that has lost a loved one from drunk driving I would.” – Nicole Richie

“And this should go without saying. That’s why I’m going to say it: Drinking and driving don’t mix. Do your drinking early in the morning and get it out of the way. Then go driving while the visibility is still good.” – George Carlin

“Teens talking to other teens about safe driving and having fun without alcohol can be very effective in changing attitudes and perceptions and, in turn, behaviors.” – Valerie Mendralla

“The problem with drinking and driving is the mourning after.” – Unknown

“Alcohol may be man’s worst enemy, but the bible says love your enemy.” – Frank Sinatra

“Most of those who are driven to drink, make the trip in the driver’s seat.” – Evan Esar

“People that insist upon drinking and driving, are putting the quart before the hearse.” – Gilbert K. Chesterton

“Consider the death of Princess Diana. This accident involved an English citizen, with an Egyptian boyfriend, crashed in a French tunnel, driving a German car with a Dutch engine, driven by a Belgian, who was drunk on Scotch whiskey, followed closely by Italian paparazzi, on Japanese motorcycles, and finally treated with Brazilian medicines by an American doctor. In this case, even leaving aside the fame of the victims, a mere neighborhood canvass would hardly have completed the forensic picture, as it might have a generation before.” – Mark Riebling

“People who insist on drinking before driving are putting the quart before the hearse.” – Evan Esar

“Every weekend, I would get the drunk driving lecture. Of course, Dad drank and drove all the time. I guess it wasn’t a lecture; it was helpful tips from the master.” – Christopher Titus

“Better to arrive sober and late than never.” – Unknown

“Drunk driving is a deceptively difficult type of case to deal with, and the risks to the client are much higher than are generally appreciated.” – Lawrence Taylor

“You can hand over your keys or your life. Make the right choice.” – Unknown

“Driving under the influence of alcohol, or ‘drunk driving,’ is by far the most commonly encountered offense in the courts today.” – Lawrence Taylor

“Many a man who is drunk prefers to drive because he feels he is in no condition to walk.” – Evan Esar

“If you drink and drive, sooner or later, you’re gonna meet the Undertaker.” – Vince McMahon

“I understand the severity of what I did and I take full responsibility for my actions.” – Tiger Woods

“Following today’s court hearing I want publicly to apologize for my unforgivable lack of judgment in driving while over the legal limit. It was completely wrong.” – Wayne Rooney

“I said that years ago I made some mistakes. I occasionally drank too much and I did on that night. I have been very candid about my past. I’ve said I’ve made mistakes in the past. People know that.” – George Bush

“If four or five guys tell you that you’re drunk, even though you know you haven’t had a thing to drink, the least you can do is to lie down a little while.” – Joseph M. Schenck

“Don’t drink and drive. It’s one test you can’t afford to fail.” – Unknown

“One reason I don’t drink is that I want to know when I am having a good time.” – Nancy Astor

“I have battled with the disease of alcoholism for all of my adult life and profoundly regret my horrific relapse.” – Mel Gibson

Have you had troubles with alcohol in the past?

“The changing of attitudes and norms is the best hope for reducing drunk driving over the long run. If more people regarded drunk driving as irresponsible and dangerous, there would be less drunk driving, more informal control mechanisms, and more support for normal encounter measures.” – James B. Jacobs

“I just need to take time out and re-evaluate and get better and deal with things going on in my life. It will take as long as it takes.” – Ant McPartlin

We hope you have enjoyed reading through these boozy quotes! We also have an amazing article full of the Best Road Trip Quotes!