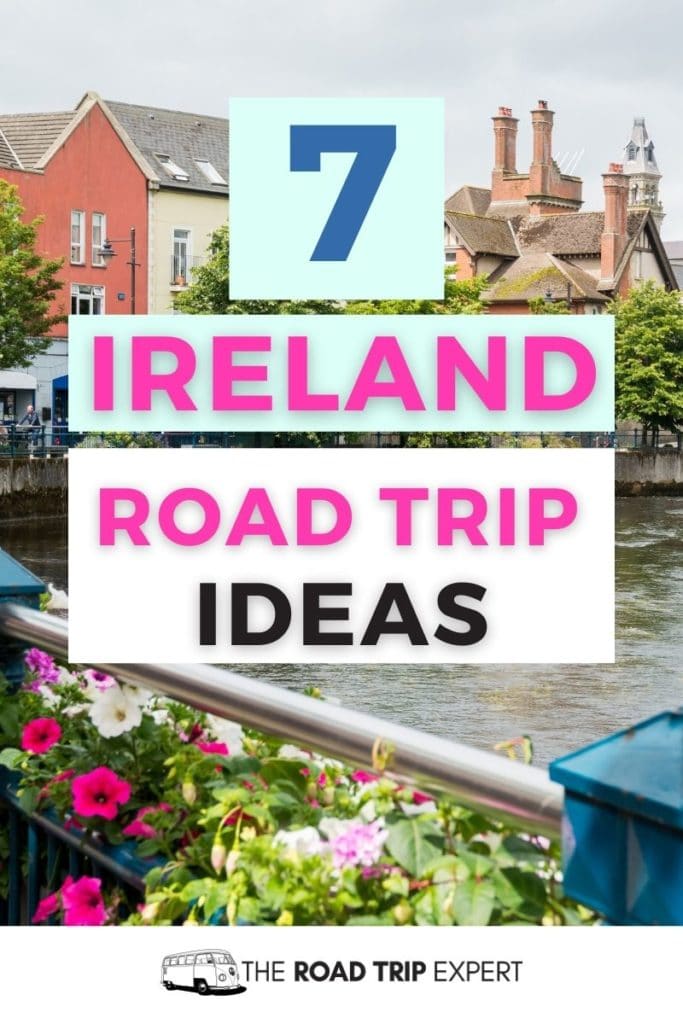 An Ireland road trip is the perfect way to explore this enchanting country.

A road trip gives you the freedom to get off the beaten track, and in a country with so many hidden treasures, there is no better way to explore and experience exciting places you wouldn’t get to see otherwise.

But how do you possibly decide where to go?

Don’t you worry, in this post, I countdown the 7 best road trips in Ireland.

This list of ultimate Irish road trips has everything.

There are striking coastal routes, cross-country adventures, and charming villages and towns.

Whether you want to escape normality for a couple of weeks, or simply get out for a day trip, you are sure to find something you’ll like.

Without further ado, let’s begin the countdown of the best Ireland road trips out there…

What better way to start off this list of the best road trips in Ireland, than with a trip from the country’s vibrant and historic capital city.

While Dublin offers plenty of buzz for many a tourist, before you know it you’ll be in the rolling hills of the Irish rural countryside.

Head south from Dublin towards the coastal town of Bray, then inland to picturesque Enniskerry, the gateway to the Wicklow Mountains National Park. Enjoy the views of the striking Great Sugar Loaf mountain – spectacular from a distance.

The Wicklow Mountains are a great place for hikes and walks in the countryside.

Stop for a picnic at Ireland’s largest waterfall, Powerscourt, before continuing with the trip and the climb towards the panoramic views at Sally Gap.

After exploring the best of Co Wicklow, continue on to charming Porlaoise.

This awesome Ireland road trip takes you through the rugged Connemara National Park as you explore western Ireland.

Head north west from Galyway toward the coastal town of Clifden before embarking on the famous Sky Road for some of the most scenic views in all of Ireland.

This short, exhilarating route is a real white-knuckle ride. The narrow road carves through the hillside and cliffs, with the waves crashing below.

When the road splits into the upper and lower Sky Roads, take the upper route, and soak up the views of the islands dotted about the ocean.

As mentioned, the road gets very narrow at times so take your time.

Cars give way to buses where there isn’t space.

After the Sky Road, continue through the spectacular Doolough Valley. The unspoilt landscape here is packed with hilltops lakes.

Finally, arrive in Westport and enjoy the beautiful beaches.

THE RING OF BEARA

If you’re partial to a dramatic coastal view, a jaunt around the Bear peninsula might just be the best Irish road trip for you.

Start this trip in the quaint village of Glengarriff, perched on Glengarriff Bay. If you can time your trip with it, the Glengarriff Folk Festival takes place in August each year.

As you work your way down the couth coast of the peninsula enjoy, the fantastic views of Bantry Bay.

The Dzogchen Beara Meditation Centre is worth a stop for its relaxing café and idyllic garden with views of the ocean.

At the very tip of this rugged peninsula, take the Dursey cable car across to the Dursey Island and enjoy the hiking trails.

From the point, head along the north coast of the peninsula. The road here is as good as it gets for road trips with Atlantic rolling waves crashing on one side. and rolling hills on the other.

The old mining townland of Allihies also has excellent walking and hiking and brightly coloured houses that overlook the Atlantic.

Before heading North to Kenmare, take a detour inland to witness the wild Healy Pass. Beautiful views are the reward for making your way up this isolated, winding road made up of hairpin bends.

THE RING OF KERRY

Beginning and ending in Killarney, the 179km-long, circular  Ring of Kerry drive is famous worldwide, and one of Ireland’s best road trips.

The route takes in rugged coastline, ocean views, islands, mountains and traditional villages. Venture off the tourist track here, there are plenty of hidden delights to discover.

Head for the Coomanaspic Pass, where you will get extroadinary views of both sides of the peninsular, dramatic cliff faces that fall straight into the ocean.

In the distance keep you can spot the isolated Skellig Michael, a craggy islet with an abandoned 7th-century Christian monastery. Star Wars fans might recognize it…

Several boats make the crossing from Portmagee during the Summer months.

Stop for a picnic and a paddle at blue flag Derrynane beach and take time out in the quaint town of Kenmare.

You can also check out Rahinnane Castle while in Country Kerry, which is one of the awesome castles in Ireland.

A trip down the coastal route of the Burren National Park – a Unesco World Heritage Site – is one of the most iconic road trips in Ireland.

You won’t see a landscape as dramatic huge limestone cliffs in County Clare anywhere else.

Start your trip at the small harbour village of Ballyvaughan, and drive out west along the coast of Galway Bay to Blackhead for panoramic views out into the ocean.

Make a stop at the windswept Fanore Beach to wander between the dunes and then head to Doolin, Ireland’s traditional music capital and the gateway to the ancient sites on the Aran Islands (you can take the ferry across). Before making merry, explore Doolin Cave, which has a huge, free-hanging stalactite.

Finally, head further south to the towering Cliffs of Moher.

This magical Ireland road trip is steeped in mystery, and rightfully considered one of the best road trips in the world.

The views are unrivalled.

Following the Atlantic coast, the 195km route between Belfast and Derry takes you past a number of Northern Ireland’s best tourist attractions.

Experience the Gobbins Cliff Path, a wild trail that winds through caves, down cliffs and over bridges.

Next, photograph the Dark Hedges in Antrim, made famous as ‘The King’s Road’ in Game of Thrones.

Cross the jaw-dropping Carrick-a-Rede Rope Bridge, for another Instagram-worthy moment.

Take a ferry over to Rathlin Island – Northern Ireland’s only inhabited offshore island – where you can see guillemots, razorbills and puffins.

Finally, soak up the awe-inspiring view of the 40,000 basalt columns making up the Giant’s Causeway.

As it’s in Northern Ireland, this fantastic Ireland road trip also features in our list of top road trips in the UK.

FINALLY, we get to our number one Ireland road trip. And what a trip it is…

Wild, long, and soaking up the all the very best of Ireland’s other western road trips, the Atlantic Way extends 2,600 km up the west coast, , from Kinsale in Co Cork all the way up to Malin Head in Co Donegal.

It’s one of the worlds longest defined coastal touring routes.

You’ll see towering cliffs, windswept bays and beaches, and mystical islands, all of which have been continuously molded by the thundering waves and untameable and storms of the Atlantic ocean.

You’ll pass mythical ancient monuments and enchanting villages, where ancient traditions and Irish language have been meticulously preserved, as well as.

Not to mention you’ll get to see all the highlights from other road trip routes in this list; the Moher cliffs, Ireland’s only cable car on the Beara Peninsula, and the Sky Road.

Surfing along Ireland’s west coast is second to none, so grab a board and try your hand in the waves at one of the many surf towns dotted along the coast. Just be sure to ask the locals where the good spots are.

If you’ve got the time, the Wild Atlantic Way really is the ultimate Irish road trip.

There you have my top 7 Irish road trip routes.

Which one are you most excited to go take?

Or do you have any other great Ireland road trip recommendations?

Either way, leave a comment below and let me know.

Disclosure: Some of the links in this article may be affiliate links. This means I earn a commission if you make a qualifying purchase, but this is at no additional cost to you. Thank you for supporting The Road Trip Expert.