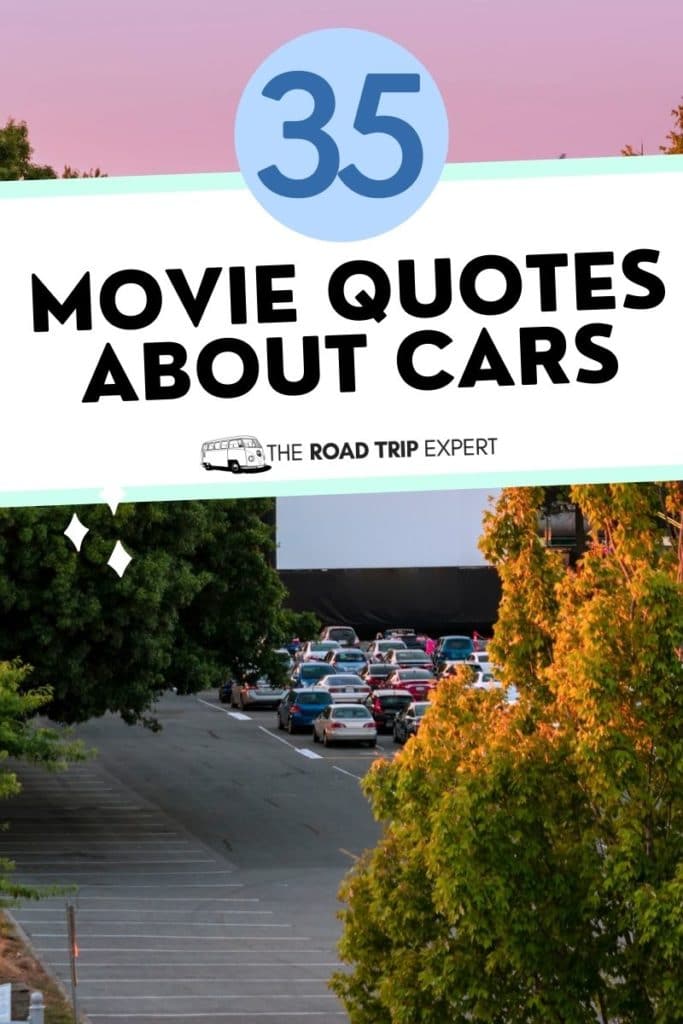 Get ready to take a ride through the best movie quotes about cars. Here we will take a drive down memory lane and dive into the best quotes about cars that have come from the big screen. Some serious. Some funny. Some unforgettable. Perhaps these might ignite your engines and leave you wanting to binge watch some classic car films with friends and family. Or, if you’re looking for some inspiration to get out of the road, our movie quotes about driving might just set you off on your next trip.

So, get the popcorn ready and buckle up for the best quotes about cars and driving that have come from films and cinema. We know you’re gonna love these!

Let’s kick off with some classic move quotes about cars. The theme of cars is not unpopular in cinema, so there’s plenty of memorable lines to choose from!

“Ferris, my father loves this car more than life itself. He never drives it! He just rubs it with a diaper!” –  Cameron Frye (Ferris Bueller’s Day Off)

“She’s faster than a cheetah on cocaine.” – Billy Prickett (The Dukes of Hazzard)

“I always say, the way a man treats his car is how he treats himself.” – Inspector Tarconi (Transporter)

“There’s a point at 7,000 RPM where everything fades. The machine becomes weightless. It just disappears. All that’s left, a body moving through space and time.” – Carroll Shelby (Ford v Ferrari)

“Something very fast. Audi S8. Something that can shove.” – Larry (Ronin)

“Would the owner of the car with license number 1AG 401 please remove it from the clamp parking garage, your car is old, and dirty.” – Announcer (Gremlins 2: The New Batch)

“You care more about that car than you do about most people.” – Thelma (Thelma and Louise)

Be honest. Are you obsessed with your own car?

“Tinted car windows are one of the first things a celebrity buys once they become a celebrity. They’re an absolute must.” – Whoopi Goldberg (Money and Actors)

“A man with priorities so far out of whack doesn’t deserve such a fine automobile.” – Ferris Bueller (Ferris Buelers Day Off)

Now if you’re in the mood to just get behind the wheel and get on the road, these movie quotes about driving are sure to rev your engines and put your pedal to the metal.

“God gave me an okay mind, but a really good ass, which can feel everything in a car.” – Niki Lauda (Rush)

Is your ride comfy?

“Need I remind you, 007, that you have a licence to kill, not to break the traffic laws” – Q (GoldenEye)

“Does this thing go any faster? We’re kind of in a hurry, and I could really open her up, if you wanted me to drive.” – Natalie (Charlie’s Angels)

“I drove up here today. I love driving. You run across so many interesting people.” – Danny Rose (Broadway Danny Rose)

“Well, I always had a chauffer, because I have never driven a car in my life. I still can’t drive.” – Bud Abbott (Money and Actors)

“The road didn’t cut through the land like that interstate. It moved with the land, it rose, it fell, it curved. Cars didn’t drive on it to make great time. They drove on it to have a great time.” – Sally (Cars)

What a great kids film the 2006 Cars turned out to be. Plenty of hidden jokes even the parents can enjoy in this one!

“It’s not the car you drive. It’s the driver who’s driving the car that’s doing the driving.” – Vin Serento (Superfast!)

What a saga Max Max is – if you’re looking for real awesome petrol head action then these are the films for you.

“It’s not how you stand by your car, it’s how you race your car.” – Edwin (The Fast and the Furious)

“I need to listen to chill music when I’m driving. It prevents road rage.” – Aaron Paul

“Are your sure your fine to drive? I mean, a minute ago you were dead!” – Benji Dunn (Mission: Impossible – Rogue Nation)

And roll credits – we’re done! We hope you enjoyed these memorable movie quotes about cars. Be sure to share these on social media with friends and family!