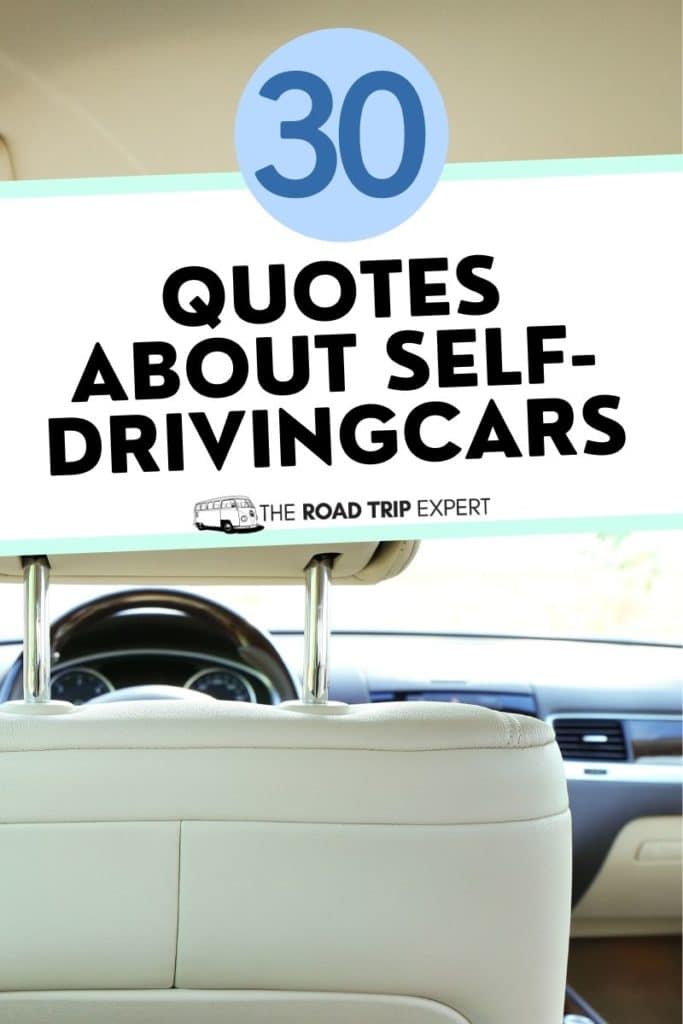 Are you really interested to hear some quotes about self-driving cars? Do you think autonomous vehicles are the future? You’re in the right place if it’s something that interests you and captures your imagination. Perhaps we won’t even have to touch to wheel in order to get from A to B anymore. Who knows?

Let’s jump-start into some well-oiled quotes about self-driving cars. There are some big names and statements below, do you agree with them?

“If you recognize that self-driving cars are going to prevent car accidents, AI will be responsible for reducing one of the leading causes of death in the world.” – Mark Zuckerberg

“I’m all for self-driving cars, as long as we can still experience driving cars manually too!” – Unknown

“Self-driving cars will double the capacity of highways because the variability of human drivers will be taken out of the equation.” – Dave Waters

“My opinion is it’s a bridge too far to go to fully autonomous cars.” – Elon Musk

“Autonomous vehicles, because they’ll be able to operate at a lower cost, will be able to pull more consumers into the Lyft network. And as you have more people switching from using their own car, they’ll be taking more rides that still require a person behind the wheel.” – John Zimmer

“Once you trust a self-driving car with your life, you pretty much will trust Artificial Intelligence with anything.” – Dave Waters

“My goal is for General Motors to lead in safe autonomous driving.” – Mary Barra

“What kind of insurance ought a self-driving car to have? If it goes wrong, who’s liable?” – Margareta Drzeniek-Hanouz

“People will just do something called mind wandering and just be in their own heads and not paying attention at all.” – Mary Cummings

“Self-driving cars will enable car-sharing even in spread-out suburbs. A car will come to you just when you need it. And when you are done with it, the car will just drive away, so you won’t even have to look for parking.” – Sebastian Thrun

“It may be safer and have more longevity, but who wants to do it?” – Unknown

“Google is working on self-driving cars, and they seem to work. People are so bad at driving cars that computers don’t have to be that good to be much better.” – Marc Andreesson

“These accidents are inevitable because the technology really has not been tested across the wide span of people and road conditions.” – Mary Cummings

“Self-driving cars are the natural extension of active safety and obviously something we think we should do.” – Elon Musk

“The key with autonomous is the whole ecosystem.  One of the keys to having a truly fully autonomous is vehicles talking to each other.” – Mary Barra

“The effect of robotization would be profoundly different if, say, truckers possessed their own autonomous vehicles rather than a corporation controlling them all.” – Alissa Quart

“Google is working on self-driving cars, and they seem to work.  People are so bad at driving cars that computers don’t have to be that good to be much better.” – Marc Andreesson

“You put a car on the road which may be driving by the letter of the law, but compared to the surrounding road users, it’s acting very conservatively. This can lead to situations where the autonomous car is a bit of a fish out of water.” – Karl Lagnemma

Here are some more quotes about driverless cars for you to enjoy. What do you think of these ones? Do any resonate with you or ignite your engines?

“Driverless cars will drive us to boredom.” – Unknown

“We don’t claim that the cars are going to be perfect. Our goal is to beat human drivers.” – Sergey Brin

“My main worry about driverless cars is how would Western journalists get their stories in the post-Soviet countries with no taxi drivers to talk to.” – Fuad Alakbarov

“We can’t simply dismiss the idea that autonomous vehicles are going to be a big part of our transportation system.” – Ted Wheeler

“It will take at least sixty years to develop vehicles that can drive under the full range of road, traffic and weather conditions in which people drive today.” – Steven Shladover

“Driving is the essence of so many good memories and stories, how can we take that away.” – Unknown

“I love the idea of being out on an open road that’s curvy and fun, when you’re driving and really getting into it. But that’s probably about 1% of my experience.” – Sergey Brin

“People are like, ‘Oh, you can’t take humans out of the loop, I’m a human and I’m an awesome driver.’ And I’m like, no, man, you’re not an awesome driver. You’re a monkey, and monkeys suck at making decisions.” – Tim Cannon

” think there’s always going to be a pleasure in being able to hit the open road and enjoy that. But I think that for a large percentage of our day-to-day driving, we’re going to prefer the car to drive itself — it will be safer, for both the occupant and the people around you.” – Sergey Brin

“I think we see the merging of several worlds, the tech industry, the internet and the automotive industry. These two worlds merging is like a smart phone on wheels, or you can say it’s a car that has many of the capabilities of smart phones and computers and so on.” – Dieter Zetche

“We believe the Tesla semi will deliver a substantial reduction in the cost of cargo, while increasing safety…” – Elon Musk

That wraps it up for our quotes about self-driving and driverless cars. Did you enjoy these? Feel free to share these with friends, family, and on social media! We also have an article full of quotes about late night drives.