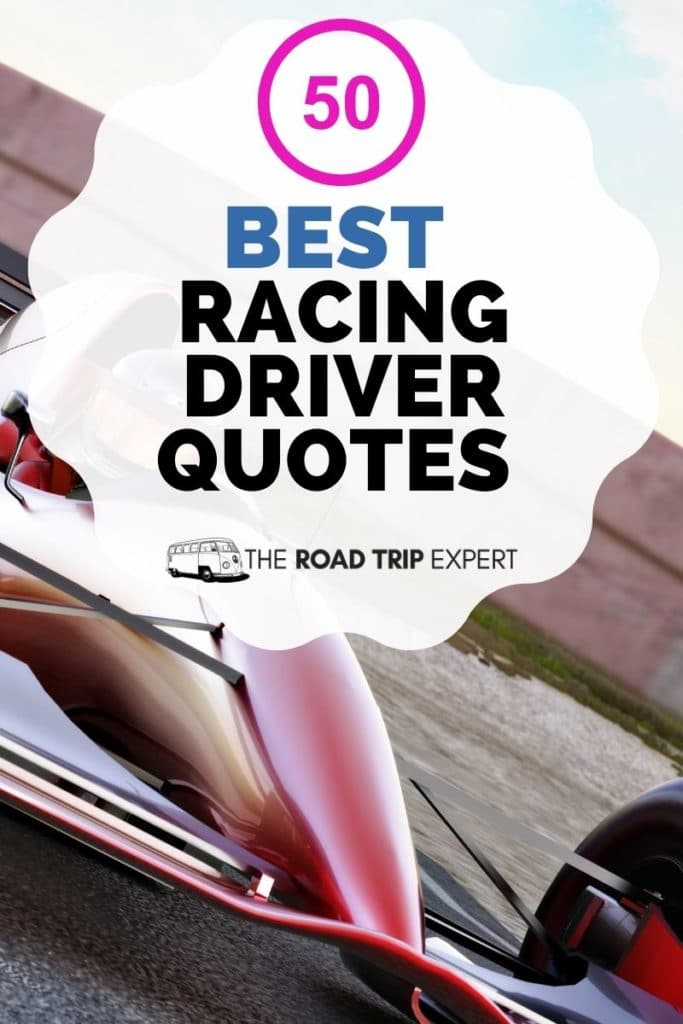 We’ve put together the best racing driver quotes from your favorite competitors. If you’re a fan, we know you’ll be overjoyed with some of these witty, bold, and awesome quotes that have come from the world of racing.

These are fast, outrageous, and heated. We know you’re all ready to put your foot down and speed off into our superb list of comments from some of the best drivers we’ve seen!

So, start your engines, here’s the green light… go!

“Racing drivers have balls, unfortunately, none of them are crystal.” – David Coulthard

“You can tell that you’re in trouble when you feel the air on the back of your neck instead of in your face.” – Buddy Baker

“I think if you’re a race car driver you want to succeed and be the best in your realm of racing.” – Kyle Busch

One thing for sure is that race car drivers are super competitive!

“If you are a straightforward racing driver you should always see your limits. You have to be objective and not come up with any bullshit.” – Niki Lauda

Niki has always been brilliantly blunt!

“Simply racing a Formula 1 car is an achievement.” – Sebastian Vettel

“There are two things no man will admit he cannot do well: drive and make love.” – Stirling Moss

“As soon as you touch this limit, something happens, and you suddenly can go a little bit further. With your mind power, your determination, your instinct, and the experience as well, you can fly very high.” – Aryton Senna

“Once you’ve raced, you never forget it…and you never get over it.” – Richard Childress

“Nobody is born with a steering wheel or a gear shift in his hand. It’s something you choose to do or you don’t.” – Mario Andretti

“To finish first, you must first finish.” – Juan Manuel Fangio

“If you can leave two black stripes from the exit of one corner to the braking zone of the next, you have enough horsepower.” – Mark Donohue

“As a child, I always wanted to be a race car pilot.” – Ajith Kumar

“If you no longer go for a gap that exists, you are no longer a racing driver.” – Aryton Senna

“The driver who cannot tear his eyes away from the wall as he spins out of control will meet that wall; the driver who looks down the track as he feels his tires break free will regain control of his vehicle.” – Garth Stein

“Driving a race car is like dancing with a chainsaw.” – Cale Yarborough

A superb metaphor from Cale Yarborough!

“You must always strive to be the best, but you must never believe that you are.” – Juan Manuel Fangio

“It is amazing how many drivers, even at the Formula One Level, think that the brakes are for slowing the car down.” – Mario Andretti

“Get in the race car do what I do then go home. We don’t have freedom to do anything anymore.” – Tony Stewart

“To achieve anything in this game you must be prepare to dabble in the boundary of disaster.” – Stirling Moss

Have you experienced the rush and adrenaline of driving a race car?

“When I take go-karts out with my friends, it’s a disaster normally. But in the race car, I’m calm because they pay me to do this, and I have to be professional.” – Fernando Alonso

“When you’re in a race car, you’re going through so many different emotions throughout that race.” – Jeff Gordon

“The racing driver’s mind has to have the ability to have amazing anticipation, coordination, and reflex. Because of the speed the car goes.” – Emerson Fittipaldi

“When I started racing my father told me, ‘Cristiano, nobody has three balls but some people have two very good ones.” – Cristiano Da Matta

“You either commit yourself as a professional racing driver that’s designed to win races or you come second or you come third or fifth and am not design to come third, fourth or fifth, I﻿ race to win.” – Aryton Senna

“Winning is everything. The only ones who remember you when you come second are your wife and your dog.” – Damon Hill

“The closer you are to death, the more alive you feel. But more powerful than fear itself is the will to win.” – James Hunt

“When I raced a car last it was at a time when sex was safe and racing was dangerous. Now, it’s the other way round.” – Hans Stuck

“There have been other tracks that separated the men from the boys. This is the track that will separate the brave from the weak after the boys are gone.” – Jimmy Thompson

“Auto racing, bull fighting, and mountain climbing are the only real sports… all the others are games.” – Ernest Hemingway

“I would have been a much more popular World Champion if I always said what people wanted to hear. I might have been dead, but definitely more popular.” – Jackie Stewart

“I do not speak the English so good, but then I speak the driving very well.” – Emerson Fittipaldi

“It’s hard to drive at the limit, but it’s harder to know where the limits are.” – Stirling Moss

“Juan Fangio was the great man of racing, whilst Stirling Moss was the epitome of a racing driver.” – Jackie Stewart

“The person travelling at the fastest pace does not always arrive at their destination first.” – Rasheed Ogunlaru

“Each driver has its limit. My limit is a little bit further than others.” – Aryton Senna

“Just being a mediocre driver has never been my ambition. That’s not my style” – Michael Schumacher

“Winning has nothing to do with racing. Most days don’t have races anyway. Winning is about struggle and effort and optimism, and never, ever, ever giving up.” – Amby Burfoot

“The winner ain’t the one with the fastest car. It’s the one who refuses to lose.” – Dale Earnhardt Jr.

“He ran out of talent about halfway through the corner.” – Buddy Baker

“Driving a race car isn’t too far a cry from driving any other sports car, but driving one through Africa in the middle of the night offers a wide scree of new sensations.” – Jonathan Miles

“The crashes people remember, but drivers remember the near misses.” – Mario Andretti

And there’s the chequered flag! We hope you enjoyed these racing driving quotes. Check out our other article full of the best quotes about driving fast!