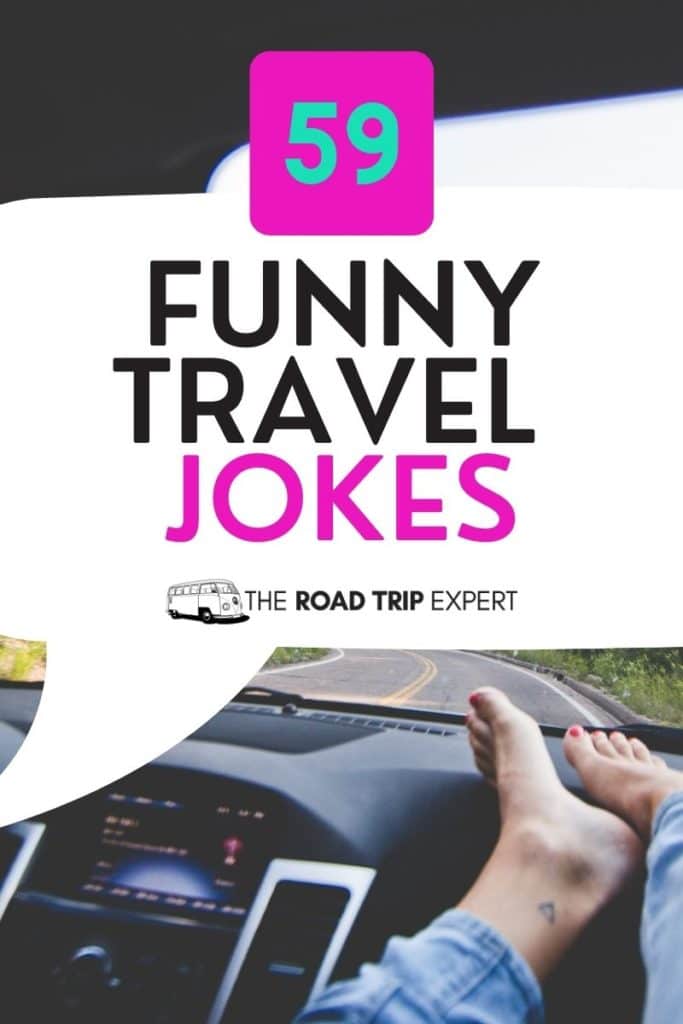 Here is a collection of some of the best travel jokes to get you laughing out loud whilst on vacation. Enjoy this carefully curated list of the best gags which will be sure to brighten up your day.

Read our favorite jokes about traveling and let us know in the comments which ones you like the most.

These vacation jokes are perfect for keeping you entertained whilst you have a few spare moments. What better way to start a hilarious conversation than by telling some travel puns to lighten the mood.

Due to COVID, I’m going to give traveling a miss this year. Usually, I’m just poor.

Did you hear about the crime committed by the artist? Details are sketchy.

My pet kangaroo doesn’t like travelling, he’s such a pouch potato.

I was livid when my boomerang didn’t come back. Then I realized it was just a stick.

I lost count of how many times I flunked a maths test at school.

I had a rubbish meal out at the moon this weekend. There was no atmosphere at all.

I tried to plan my vacation with a broken pencil, it was absolutely pointless though.

Why did the coffee have a rubbish vacation? It got mugged on the first day.

Two sharks are inside a tank. One of them asks the other, “any idea how to drive this thing?”

How did the buffalo say goodbye to his son at the train station? Bison!

I could hear a constant buzzing after returning from my holiday. The doctor said it’s just a bug going around.

Why was it hard to make a group of communists laugh? They all need to get the joke.

I thought raining cats and dogs were bad, then it started hailing taxis.

I’d tell you the joke about construction but I’m still working on it.

Did you hear about the bankrupt origami business? It folded.

All my neighbors are crazy about this new broom they’ve bought. It’s sweeping the nation!

Why did the shark hate its vacation in France? It wanted to go to Finland instead.

Did you hear about the fire at the bakery? The business is toast now.

When you’re at the airport what kind of chocolate can you buy? A bar of plane chocolate.

I told a few jokes to some unemployed friends of mine, non of them worked though.

What is a pepperoni’s favorite place to go on holiday? Leaning Tower of Pizza

What stays in one corner but also travels the world? A stamp

My girlfriend complained last night that I never listen to her… or something along those lines.

Why haven’t we had alien visitors to Earth? It’s good bad ratings – one star.

What do you call a traveler that doesn’t lose its temper? A nomad.

How do you know when an ocean is happy to see you? It waves.

What did the watch say to the other watch on a plane? Wow, time flies!

What do you call a mix between a plane and a snake? Boeing Constrictor!

Did you hear about the pasta salesman? He wants to be paid in penne’s

Can you think of something that is brown, and very sticky? A stick.

What is a hamster’s favorite place to go on vacation? Hamsterdam!

The cheese factory in my town collapsed last week. All that was left was de Brie!

I met the guy that invented the door knocker recently. He got awarded a no-bell prize.

What’s the problem with flying on Peter Pan airways? They neverland!

How did the shell celebrate its birthday? It had a shell-ebration on the beach!

Why was the librarian angry at the airport? Her flight was overbooked

What did the volcano write on a valentines day car? I lava you so much!

Why did one airplane annoy the others? Bad altitude.

Where is a Bee’s favorite vacation destination? Stingapore!

What did the bean say to the other bean when it came back from vacation? How have you bean.

What did the flight attendant say to the elephant? Only one trunk was allowed as a carry-on!

Why did the cross-eyed teacher get fired? She couldn’t control her pupils.

Looking for more entertainment whilst on a family vacation? Check out our awesome family road trip questions!

Copyright notice – These travel jokes and puns were adapted from well-known jokes found online. Due to the number of platforms and sites they’re posted on, it would seemalmost impossible to pinpoint the original source. If you strongly think that one of these is “your joke”, please send use our contact form!

If you enjoyed these travel puns, you may also like to read out best road trip puns!

Disclosure: Some of the links in this article may be affiliate links. This means I earn a commission if you make a qualifying purchase, but this is at no additional cost to you. Thank you for supporting The Road Trip Expert.

Iain founded The Road Trip Expert in 2019 and continues to manage the website to this day. The inspiration to start the blog came during an extensive road trip around Europe with two friends that spanned several months and involved over 25,000km of driving. He started backpacking in 2014 and has had the pleasure of exploring over 60 countries. Read more on the About page.