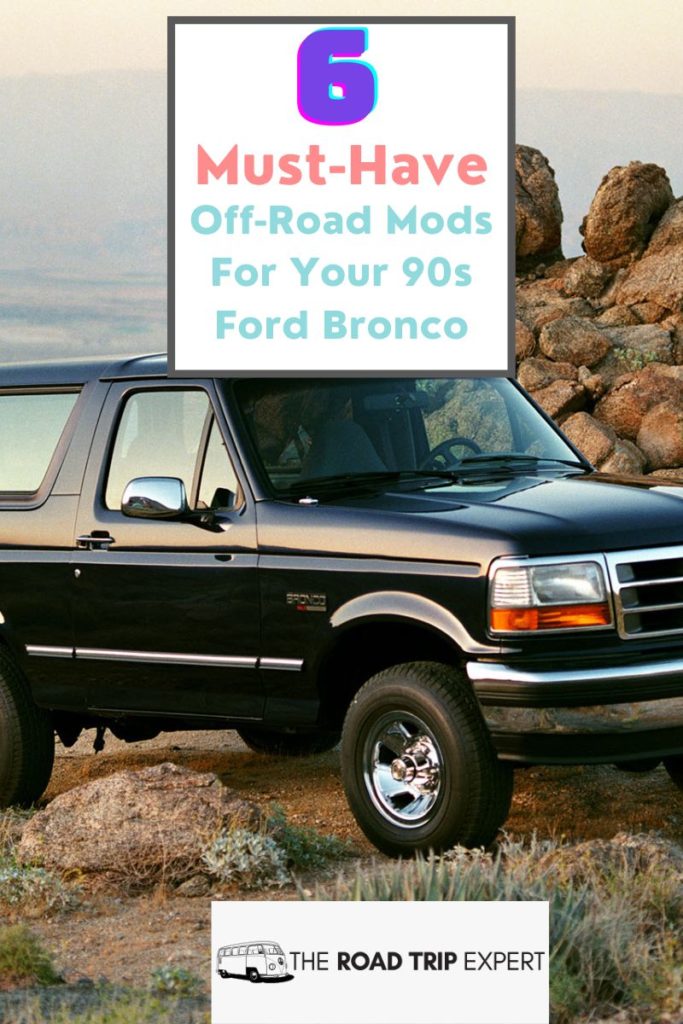 The 90s-era Ford Bronco represents the last generation of the muscly 4X4 SUV that’s easily modifiable for driving through off-road terrain. Modern buyers are snapping up unmodified 90s Broncos for the experience and pleasure of turning wrenches on a vehicle that doesn’t need endless tweaking to deliver perfection.

Finding the perfect 90s Ford Bronco mods for off-roading is easy and affordable due to the sheer number of after-market parts available at retail. Here’s a look at the must-have off-road mods for your fifth-generation Ford Bronco.

Being able to make your way across rough terrain in the dark is one of the challenges of off-roading. The standard headlights aren’t strong enough to cut through the darkness and shadows of vegetation make additional mounted lights a necessity. But hold up before you go and order that LED light bar, especially if you want to keep your Bronco looking correct for its time period.

We suggest at least two round lights for the bumper and a minimum of three for the roof. The more lights the better Don’t forget to opt for round lights with LEDs that look like they’re straight out of the 90s. Consider adding covers to your lights that are blacked out, branded, or have a smiley face!

Mounting a Winch to the Front and/or Rear

Mounting a winch to the front helps you get out of sticky situations with ease. If you’re driving through areas that are extremely tricky, you could consider installing one on both ends of your Bronco.

A winch can be hooked to a tree or rocky outcropping to enable you to draw your Bronco out of a quagmire or treacherous situation. It’s usually better to go forward, hence our advice to prioritize the installation of a front-mounted winch.

Lifting your Bronco is a practical modification that makes it easier for you to clear water barriers with reduced risk to the engine. You can also see more of your surroundings. Make sure that you pair your lift kit with shocks and struts that are appropriate to the type of off-roading you’re looking to engage in.

It’s important for your Bronco to be able to take the hits that are common during rough conditions without sustaining damage.

That being said, you wouldn’t want to feel beaten and bruised from the impacts after a day of off-roading. That’s why it’s important to have the shocks adjusted correctly.

In the event you’re fortunate enough to own a 90s Bronco with a removable hardtop, you’ll find the roll cage is a handy modification to protect your Bronco’s chassis. The 90s Bronco has a reasonably high center of gravity which puts it at risk of a rollover during off-roading.

A roll cage protects the passengers of the car and absorbs shock in the event of a rollover or collision. The cage supports the upper frame of the Bronco to protect the occupants and reduce the risk of structural collapse.

Brush guards, also known as bull guards, are made out of tubular steel that covers the headlights and grill without blocking airflow. Their purpose is to prevent the breakage of the headlights and the grill as you pass through brush and vegetation. They come in various configurations including ones that won’t interfere with the operation of a winch.

The brush guard was a popular modification for the 90s Broncos, and installing one is in keeping with the fashions of the time.

Replacing the transmission in your 90s Ford Bronco may seem like an odd modification, but it’s a wise one. This is especially true if you’re planning on using your Bronco for regular offroading excursions.

The fifth-generation Bronco comes with a transmission known as the E4OD. It’s a strong transmission in terms of handling the power from the engine and shifting gears, but it has issues that make going offroad frequently a risky proposition.

The original Ford E4OD transmission is notorious for issues that include:

You’ll be able to get the most out of your fifth-gen Bronco when you go off-roading with a remanufactured transmission.